I’m feeling nostalgic. As I watch each page materialize under my pen I can’t help but look at where I started and how far I’ve come. The image above is from the latest and third book in the Pinocchio, Vampire Slayer series which I started, with the help of Van Jensen, back in 2008. Back then I had never worked on a graphic novel. Sure I’d worked on long-running newspaper comic strips, some with long story arcs that probably could have filled the space of a graphic novel. But, I’d never sat down and worked on a book. I was curious. I was excited. I was going to try it and see what happened. 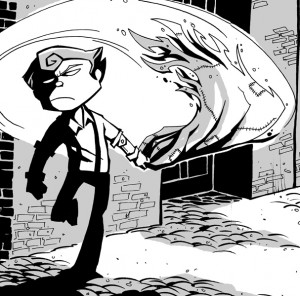 While I had several stories to choose from, I chose Pinocchio. It was only going to be one book, so I’d finish that and be able to work on one of the numerous other, longer, stories floating around in my brain. I started writing it and things just weren’t clicking, so I called up Van, who I knew wanted to write comics. I knew I had a good idea, and Van went and made it better. Collaborating with him is easily one of the best decisions I’ve ever made (Besides getting married to a beautiful woman and having a beautiful baby of course. Sorry for getting off the subject. I’ve learned to play it safe.). Van kept the spirit of my original idea alive along with introducing his own fantastic ideas while also inspiring me to come up with new ideas of my own. Sometimes we’ll joke that we can’t remember who came up with what, although I’m pretty sure we both have favorite one-liners that we’ll lay claim to if asked. I couldn’t have asked for a better person to work with on this endeavor.

In the middle of working on the first book, we both realized we had more than one book’s worth of story. But no one was sure how successful the story would be. Admittedly many people didn’t believe we could write one book about Pinocchio slaying vampires, much lessthree. At the suggestion of our publisher, Dan Vado, we wrote the ending to the first PVS book in a way that the story would feel complete. Then it happened. People liked the story. A lot. So Van and I got the go ahead to finish the story we started, and we got to do it the way we wanted to. Those other ideas I had would have to wait while we devoted the next two years to working on the next two books. And the story expanded, with Van and I letting the reigns of creativity lead us down paths I don’t think we ever imagined it would have taken us, introducing us to characters we never could have believed we’d meet during a phone call back in 2008. 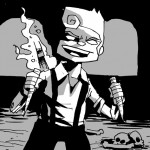 I work on the books at night. When I’m pushing my deadline I’ll work on them 7 days a week for months, often staying up until 1 or 2 a.m. only to get up and go to work in the morning. It can be… exhausting, and at the same time so refreshing. I can sit down to work on a page barely able to keep my eyes open, and then I’m wide awake, furiously scribbling as I bring to life puppets on a screen. Sometimes I feel ridiculous for working so hard on a story about puppets slaying vampires. I think to myself… is it really worth all this work? But I know the answer. I have as much choice in this as a dog does about chasing a squirrel. I don’t draw the story, the story makes me draw. Sometimes I feel like I’m cursed like Pinocchio, he’s stuck as a wooden boy, and I’m stuck drawing this book without any way to will myself away from it. Quitting is not a choice I have.

I’ve always been told I’m pretty good at drawing. I probably get told that too often. Sometimes it helps to get a good kick in the pants in that regard. I got one earlier this week after talking to an editor about getting some more regular work drawing (something other than Pinocchio). It was a fairly defeating note, particularly because I respected the author, and because they still tried to be pretty nice about it… and because I believe they were right. I think for most artists, when they receive that kind of criticism, the immediate response is to throw their hands up. Is it worth it? Is it worth the exhaustion, the late nights, the time spent away from friends and family locked away working? Maybe it’s time to say you’ve given it your best shot and call it a day. But I’ve decided to take that note with a sense of optimism. Perhaps the same fate that put me in a situation to get to work with Van is steering me in a different direction than I think I should go. I look at where I’ve come as an artist; how much I’ve grown. I look at where I’m going. It helps to have somebody show you the ground occasionally. I think I was getting too close to it. Now I’m once again moving forward and upward. And as tired as I am, I feel refreshed. I feel alive again, alive in a way that I can’t explain to anyone who hasn’t felt it.

Admittedly, this could also just be feelings of extreme exhaustion… I know, I just killed the moment.

Below is a panel of PVS 3 that I drew tonight. Three years ago I never would’ve attempted drawing a character from such a weird angle. Now? I relish the opportunity to challenge myself. Keep an eye out folks, there’s going to be more where that came from. 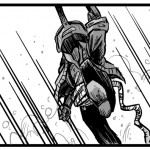 One thought on “On Pinocchio, inspiration, and plans”